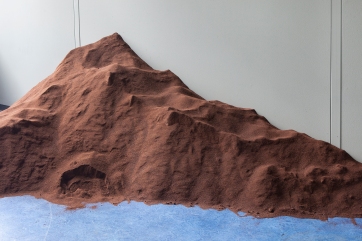 In the last decades, cultural, political and economical boundaries have become more flexible and permeable. The transnational culture and physical flows are enormous and there is an increasing number of expats, migrants and refugees.

When encountering a new world, the migrant needs to apprehend a new place. If belonging implicates the intimacy with spaces and objects around you, being out of place involves the lack of comfort with your surroundings.[1] The “out-of-placeness” makes one conscious about things that are usually automatic, like navigating the streets or even reading signposts. Arriving in a new environment throws the body into the necessity of discovering a new corporeal schema and to restructure its mode of operation.

Sensorial Shelter started as an investigation on what brings to the body a sense of home and belonging. Being a foreigner myself, I questioned how the spaces and objects around me interfere with this feeling. The dwelling space specially captured my fascination as the location where the in- between self can attempt, through the presence of personal objects, to build island of comfort within the unfamiliar.

When moving to a new country a selection must be made of what is worth bringing with you. The meaning of those carefully chosen elements intensifies or even alters with gaining a new status: from this moment on, they embody the distant home. To bring familiar objects to a new context “is not to lose sight of their history but to refuse to make them history by losing sight. Such wonder directed at objects […] allows the familiar to dance again with life.”[2]

Food plays a very important role in creating the possibility of experiencing identity through the senses, even at distance. Having lived in Amsterdam for three years I realized that most immigrants I know have at least one food item from their home country of which the presence is imperative in the kitchen cupboard. In my case it’s Brazilian coffee, which I always order and stock. Even though there is a large variety of coffee here it is not quite the same.

The highly evocative power of food can overcome an estranged space and transform it into a place of belonging through taste, smell, the familiar sight of the food and the physical ritual of preparing it. A mug of coffee can be stronger than built architecture.

The installation and performance Sensorial Shelter reenacts the construction site where this shelter is in the making. It consists of a landscape of coffee, a self-made brick machine, some basic tools, a bucket of water, a drying rack and finally the first bricks laying in line, starting to form the walls. At first sight the pile of coffee looks like soil but the smell betrays the true identity of the material. It exhales a very impregnating scent that outgrows the walls of the room where it is present and navigates the rest of building.

The ongoing performance is the process of making bricks out of coffee, and continually building this shelter up. The repetitive body movements gain a ritual quality that reflects the everyday attempt at finding shelter, at belonging.

The brick making technique and the machine that is used are traditionally deployed to make mud bricks. This method uses soil from the construction site itself to build. The replacement of soil by coffee is an attempt to focus on being a foreigner through something as basically human and visceral as food. It is a way of looking beyond ideas of nationality or territory, an effort to break from rational concepts of who is “me” and who is “the other”, to apprehend the connections that exist on an essential level – and wonder what are the symbolic shelters that we share.

The coffee brick itself has a lifespan. As the brick dries it reaches a pick of power when it is hard and light, perfect for handling and piling. As it continues to dry it becomes extremely fragile and cracks appear in the walls. The limitations and strength of the chosen material embody the paradox of power and fragility of this shelter.