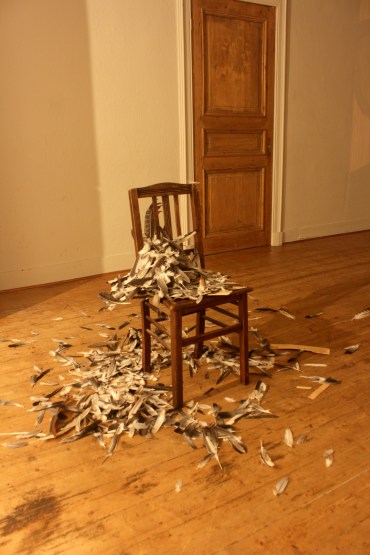 I made this work when I was moving out of my house where I lived for 12 years. During that time, I broke the chair used in the sculpture by sitting on it repeatedly. This chair belongs to the period I lived in that house; I got it when I moved in and broke it in the last year of my stay there.

During that time, I collected feathers wherever I came across them: when walking on the streets, in parks, in the garden but also when I went on vacation further away from home. Feathers recollect the symbol of freedom to me. They are reminders of flying; they have been in the air with the birds that carries them.  They also hold a memory of their own: you can identify the type of bird that they came from, mostly doves; they contain the DNA of the bird that grew it and hold chemical traces of the birds living environment.

Bringing the feathers and the chair together in the sculpture, I was reflecting on the years that passed by. I had periods of being mentally stuck, with some severe depressions and the feeling that I didn’t belong in society. But I also had things that helped me to lighten or overcome those periods symbolized by the feathers. In the installation, the feathers and the dark chair are brought together to create a tension between those two materials.